If you’ve been reading this blog for a while, you know that I’m big on tracking, numbers, and statistics related to my wardrobe and shopping (see how I do my tracking here).  I think that tracking can be highly beneficial for recovering shopaholics, as well as anyone who wants to shop smarter and better utilize the wardrobe pieces they own.   I’ve been tracking how much I spend, what I wear, and how often I wear it since the beginning of 2011, and last year I added photos and an outfit journal to the mix.  Using these types of analysis can help us make fewer buying mistakes over time.

It can be helpful to periodically review and analyze our purchases.

Another thing that I find helpful is to review my purchases and see how they have worked out for me. In today’s post, I’m going to look at the items I brought into my closet from January through June of this year and see whether my new items have become wardrobe workhorses or closet benchwarmers.

It’s a bit too early to look at the pieces I purchased during July through October, as I don’t yet know whether those buys were smart or ill-advised. For one reason, many of those items are for fall (looking at you, Nordstrom Anniversary Sale purchases), and the cooler weather hasn’t even started yet where I live.   I will address what I’ve bought during the second half of the year in one of my end of the year wrap-up posts (check out what I called my best and worst purchases for 2014 – I don’t agree with all of those assessments now!).

The Basic Numbers – January through June 2015

Let’s start this analysis with a few basic numbers (doesn’t include undergarments and sleepwear):

The photo below shows all 38 of my January through June purchases.  I will delve into the other categories in the following sections.

These are the 38 items bought from January through June 2015.

What I Still Own

Before I explore which purchases were good and which were less than ideal, let’s look at what I still have in my closet today.   As I mentioned above, I still have 29 of the 38 items I bought during the first half of 2015, which is roughly three-quarters (76% to be more exact).   Here’s a snapshot of those pieces that have stuck around:

These are the 29 January through June 2015 purchases that I still have.

Starting on a High Note – The Best

Let’s start on a high note and look at my best purchases of the year thus far.  The twenty-one items shown below – eighteen garments, two pairs of shoes, and one pair of earrings – are what I consider my best buys for the first half of 2015.  These items represent 55% of my purchases from January through June. 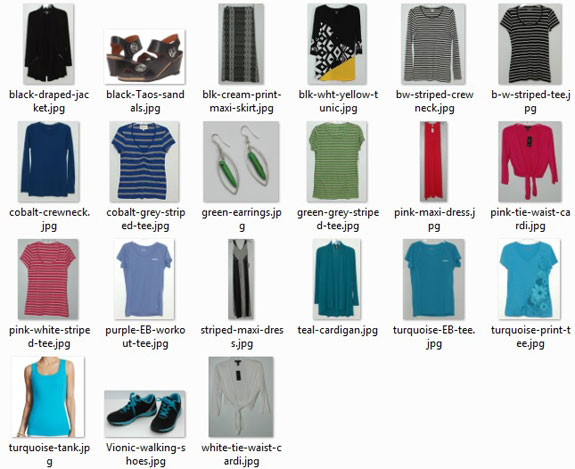 These were my best buys from January through June 2015.

Here’s a closer look at these items (since I know those thumbnails can be difficult to see) – first the tops (11) and then everything else (10):

Instead of looking at these items one by one (which would be a bit tedious, even for me…), here are what I see as some of their common characteristics:

Most of the items pictured above have already been worn many times and I believe all 21 will be wardrobe workhorses for some time to come.   Last year, I designated just 9 of my 27 January through June purchases as good buys, which was one-third of my total buys.   I only agree with 7 of those assessments at this point (the other two items have left my closet), so the total would be even lower (26%).  Thus, my shopping success rate has approximately doubled over last year. It’s nice to see that my hard work on all of this is paying off!  It takes time and effort, but it’s definitely possible to become a smarter and more successful shopper.

The Flip Side – 2015 Shopping Mistakes

Of course, not all of my buys from the first half of this year were good ones.  Sadly, I have continued to make some shopping mistakes, but my failure rate has slowed down as I’ve become clearer of my personal style and stopped buying for a wished for or imagined lifestyle.

Let’s first look at the lesser mistakes, those garments that I was able to return for refunds.   Of course, these are not the only returns I’ve made this year.   There were also other items that I bought and returned within a given month that didn’t appear in my monthly accountability updates.  I have not kept track of all of those returns, but many were online purchases that didn’t work out due to sizing issues and inaccurate web descriptions (which is bound to happen and difficult to completely avoid).

The five items shown below (13% of my purchases) were January through June buys that ended up being returned to the store of origin for a full refund:

I returned these five items that I bought during January through June-2015.

I have since found better alternatives for all three items in the top row – longer black jeans (the first pair was a marginal length), a better fitting denim jacket with some stretch to it, and a grey tie-waist cardigan in a cooler tone and with longer sleeves.   The other two items were merely returned and never replaced, at least not yet. I don’t necessarily need a thick silver bracelet, but I would still like to find a pair of metallic flats to replace the ones I purged from my closet early in the year.   I just want to make sure to find the right ones rather than settling for shoes that I don’t love or which hurt my feet.

Purged or Soon to Be Purged Items

Unfortunately, I wasn’t able to return all of my early 2015 shopping mistakes for refunds.  The seven items pictured below (18% of my purchases from the first half of the year) were either already consigned or donated or are slated for that fate shortly.

Although it’s nice to be able to consign some pieces, I’m usually only able to recoup 25% or less of my losses that way.   It’s far better never to buy the right things in the first place!  In order to avoid making more purchasing mistakes in the future, it’s useful to examine what the above poor buys had in common:

I still have the skirt, pink tee, and walking shoes in my closet, but probably not for long.   I found a replacement for the skirt in September and I have plenty of other tees that I prefer, so those garments will be passed on shortly.   I replaced the black walking shoes back in June, but I always like to keep a spare pair around.  I didn’t do so early in the year and was left having to buy new walking shoes when one of the soles on the ones I was wearing split in half!  That led me to purchase the shoes shown above a bit hastily via eBay.  I thought they were the exact same pair as my old ones, but the toe-box felt somewhat constricting and I should have returned them.  If I’d had a back-up pair on hand (usually quite worn out but still wearable), I would have held out for shoes I knew would work instead of keeping the ones I had ordered.  Lesson learned, which is why I’m keeping the ones above even though they kind of hurt my feet.  Once I replace my current pair, I will donate them.

The Jury is Still Out…

Five of my January through June purchases (13%) have either not been worn at all or only a few times thus far:

The jury is still out on these five purchases from January through June 2015.

I’m actually kind of surprised that some of these items are currently sitting in “benchwarmer” territory, as I really thought they would be worn regularly.   Below are my assessments for why the above items have not (yet and maybe not ever…) become wardrobe workhorses.

I can see issues with all of my “unsure” items – buying off season, buying for emotional rather than rational reasons, and settling for less than what I truly want. Buying off season can be risky, but sometimes we have to do it in order to get the pieces on our shopping priorities lists.  This is particularly an issue for those of us who live in climates that don’t fall in line with the retail calendar.   I’m not upset with myself for buying the black jeans. It really did take me a long time to find a good pair and I do believe I will wear them.   As for buying for emotional reasons and settling for less, those are issues I’m still struggling with and I’m sure will be the topics for future blog posts!

The type of analysis I did in this post took a decent chunk of time to complete, but I believe it was time well spent.   Many of us often spend several hours or more trying to find the perfect item online or in a store.  So why not invest the same amount of time to review how well we did with our shopping over a period of several months?   Sure, analyzing your purchases isn’t as enjoyable as shopping, but it’s also not much fun to have a closet full of clothes you don’t wear or inflated credit card bills!

I highly recommend that you keep a running list (or photos – or both) of the pieces you buy, and that you pause to review your purchases at least twice per year.  Quarterly would be even better, as you might be able to identify unproductive buying patterns and turn them around before the year is over.   As you can see with my reports, I made some good buys and some mistakes, but I’ve been able to learn valuable lessons from both categories.   I’m sure I will learn even more if I continue to review my new closet acquisitions regularly, and I believe the same will be true for you, too.

I hope you found this post both interesting and helpful.   Perhaps some of you are now motivated to do purchase analyses of your own.  Such in-depth probing is not the right path for everyone and may feel overly excessive to some, but I like to share my process with you in the hope that it might inspire you in some way.   As with everything else in life, I encourage you to take what feels right for you and leave the rest.   You can always revisit some of my ideas at a later time if they feel like a better fit then.

I invite you to share your practices and methods so we can all learn from each other.   I know my method isn’t the only way by any means. I’m open to learning new ways to start shopping smarter and making better purchases all around. That’s a big part of what this blog is all about!

Items That I Loved… But Ultimately Returned

A Changing Approach to My Wardrobe Holding Zone

October Wardrobe Update: 10 Pieces I Passed On and Why

I Don’t Care What “They’re” Wearing