Now it’s time for the bad news in regards to my 2014 shopping, my worst purchases of the year.  I wish I could say that only a few items fall into this category, but that’s not the case. Although my shopping track record has definitely improved over previous years, I clearly still have a lot to learn.  Since learning and growth are really the purposes of this blog – and all of our journeys – I feel there is merit to analyzing both the good and the bad (and we all know that I love some good analysis!). 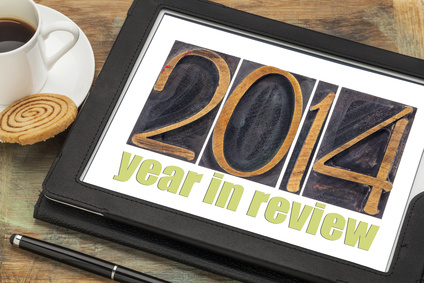 Have you taken the time to review your 2014 purchases?

In today’s post, I share the bad purchases I made this year, as well as those items that remain in uncertain territory.   As with my best purchases post, I include lots of photos and aim to find common ground among the pieces that just weren’t good buys.  As for those unsure items, I will make educated guesses as to whether or not they will become wardrobe workhorses in the future.   It’s kind of a “mixed bag,” but I’ll do my best to predict which pieces will have staying power and which ones will likely be headed out the door in short order.

This post is a long one (perhaps I should have made this a three part series), but it’s the end of the year, so why not sit down with a nice cup of coffee, tea, or hot cocoa (or even a stiff drink) and think about your own purchases as I recount mine.  There is value in looking at what we bought and how our purchases have either served us well or fallen flat.   If you do this type of analysis (which I recommend), try not to beat yourself up too much for your shortcomings.  I will try to keep this review lighthearted as well, as I cannot go back and change the past.  We can only look forward and it’s useful to do so with the lessons from the past firmly in our minds.

So let’s get started!  As I mentioned in my last post, I added 55 new items to my closet during 2014.  This number includes clothing, shoes, and handbags, and a few gifts are also represented in this total.   What is not included are jewelry pieces (to be written about in a future post), sleepwear, lounge wear, workout clothes, and undergarments.  Here’s a bird’s eye view of what I bought last year:

The Bad Purchases – An Overview

Let’s look at the bad purchases first.  The 13 items shown below have already been removed from my closet.

The 13 items above were bad purchases that are no longer in my closet.

I’m not going to write about each item individually, but I would like to share a few points of interest about my ill-advised purchases.

Where They Came From: 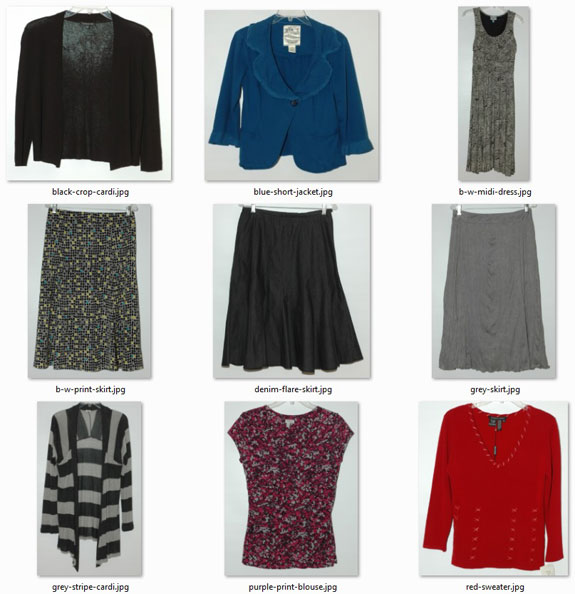 9 of my bad purchases were bought at consignment stores or on eBay.

Back in September, I did an analysis of my resale shopping and wasn’t happy with what I learned.  Fortunately, I’ve done very little resale shopping since that time and my overall purchases have been more successful as a result.

I can be successful with online purchases, but I need to make sure that there are good return policies in place and that I handle any necessary returns in a timely fashion.   While I like to be able to try things on before buying, the selection is much higher online and the shopping experience is usually far easier, too.  There are no crowds, no high-pressure sales, no traffic, and no parking difficulties, to name a few advantages of online shopping.

When I Bought Them:

Even after writing an entire post about “The Dark Side of Alterations” late last year, I still didn’t learn my lesson about trying to “rescue” clothes by means of tailoring.

These 6 bad purchases were altered and rarely worn before being purged from my closet.

Hopefully, I have finally learned my lesson about alterations.  I said I wasn’t going to beat myself up in this post, so I won’t write about how I feel like an idiot for falling prey to stupid logic yet again (or maybe I just did write about that).  Sometimes we have to experience things a number of times before we learn our lessons.   I think my lesson is three-fold:

Those “On the Fence” Items

I’m also not going to write about each of these items individually, but I will share a bit about why I’m unsure about whether they will work for me or not.

Thirteen of my “on the fence” items have not yet been worn.

Two of my unsure items are probably bad and likely won’t stay in my wardrobe for very long.

I probably won’t be keeping this dress and jacket for much longer.

May Be Too Dressy:

I love the two items pictured below, but I think they may be too dressy for my lifestyle.

This lovely top and coat may be too dressy for my casual lifestyle.

I plan to keep both of the above items, at least for now.   Even if I haven’t had the occasion to wear them, I like the styles and the way these garments look on me.   Hopefully, they will stop being “benchwarmers” in the New Year!

New Styles for Me:

I’m on the fence about the four garments below because they are new styles for me and I haven’t embraced them as of yet.

These four 2014 purchases represent new styles for me that I need to embrace!

I’m Optimistic About Most of My “Unsure” Purchases

Most of my “unsure” purchases will probably end up working out for me.   I really do like the way most of them look, but I didn’t feel right including them in the “good list” when they either haven’t been worn or have some sort of issue, like the ones I discussed above.

A few of the items that I didn’t discuss are on the fence because I’m just not sure I love them.  The black pants, grey blazer, charcoal skirt, and black and white print tee fall into this category.   I’m going to give each of these items at least one more try to see how I feel, but I’m not going to keep things around indefinitely like I used to do.  I will likely use the “first impression test” again soon to further pare down my wardrobe, as it was so helpful for me back in October.

My 10 Worst Purchases of the Year

In my last post, I shared my top ten purchases of the year, so it’s only fair that I also write about my ten worst buys of 2014.

Here they are, my shopping low points of the year, with a bit about why I included them in this dubious category.

Wow, that was a long post, but I hope it was interesting and helpful to you.  I always hope that by sharing my examples, you’ll come to some realizations about your own wardrobe and shopping.  I know that I learned a lot through writing this post and I hope you learned a few things, too.  Here’s a brief recap of what I learned:

I’m sure I could come up with more lessons, but that’s a pretty good summary.  If you noticed anything else from my bad and unsure purchase review, or if you’d like to share some of your own shopping experiences and lessons from this year, please feel free to comment.

Before You Go – A Few Quick Things to Share

Before I sign off for the day – and the year, I’d like to tell you about something very exciting!  I’m going to do a full post about this next week, but here’s a little sneak peak…

My Second Book is Now Available!

My second book, “End Closet Chaos:  Wardrobe Solutions from an Ex-Shopaholic,” has been published and is now for sale on Amazon.com.    This book contains the best of my wardrobe management solutions from the blog, categorized into logical sections related to various closet conundrums.  There are eight sections and forty chapters in all.

I’m very proud of this book and hope it will be helpful to anyone who chooses to read it.  I will share more details next week, but if you want to check out the book, click here (you don’t need to own a Kindle to read it – you can download the free Kindle app for your computer or device HERE).

Also, if you’re thinking of starting Project 333 in the New Year, you might want to check out Courtney Carver’s Dress With Less Microcourse.  It includes a lot of great information to help you get started, including 9 PDF worksheets, fun playlists to listen to while sorting through your closet, and access to a private Facebook group.  I took this course before I started Project 333 last year and found it very informative and supportive.

Lastly, I want to wish all of you a very Happy New Year!  Thank you for following my blog, whether it’s been for a few weeks, a few months, or since the beginning.  I am extremely grateful for your readership and I wish you all the best in 2015.

I’ll be back soon with more 2014 wrap-up posts, additional information about my book, and lots more…  I hope we can all be smarter shoppers, have more cohesive wardrobes, and fuller lives in the coming year!

What I Don’t Wear Anymore – Part One

Pandemic – One Year In…

If One is Good, Five isn’t Necessarily Better